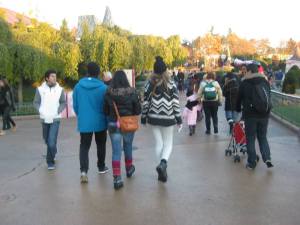 I made some friends in Versailles. A Kiwi couple Jess and James, another Kiwi Ellen (she had gone to Amsterdam) and a Spanish girl named Antito and an Italian boy named Pedro. Pedro didn’t come with us to Disneyland because he had a museum pass that he wanted to use before he left Paris.  So it was just Jess, James, Antito and I. We met at Saint Michel and caught a train out to Disneyland.  The tickets were cheap that day so we were lucky and it was off peak season so hardly anyone was at Disneyland so we could get on the rides quickly. 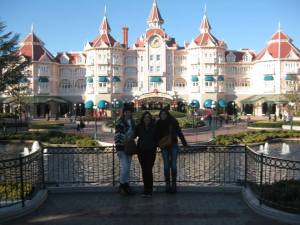 I had never experienced anything like Disneyland before.  I felt this childish joy and it was so beautiful it made me want to cry, in fact I did cry at the Spectacular show at the end.  I have never been on a scary ride before so it was such an overwhelming day for me.  Jess and James decided to “ease” me into the scary rides so we went into Toy Story world first and did the toy soldiers ride first, which was so much fun and then we did the Tower of Terror ride, which was FUCKING INSANE!!
I don’t even know what life is after that ride! Antito was too scared to come, which in hindsight I do not blame her because what the fuck is life?! Please tell me because I DO NOT KNOW!
Basically this story happens at the start of this family that died and now they haunt the castle/elevator. So it tells the story, you go in and a man is “acting” as the life operator and scores you etc. then makes sure you’re strapped in safely before the elevator rises and it opens to random floors, showing a ghost projection of the family before DROPPING THE FUCK DOWN!!
It literately drops so fast that you rise off of the seat; I understand why they have straps now.  It will rise again and then drop fast again, and again and AGAIN! It was fun but oh my god 30 seconds is enough.
The elevator doors open and the guy is standing there picking his nails, completely unmoved by the screams and horror. IT added so much to the ride.

The next horrifying rise was a roller-coaster called the RocknRolla. It was an Aerosmith ride where you walk into a music studio and hear them speak and go through a hallway of old school rock merchandise, like The Beatles, Led Zeppelin, SCDC, Metallica and I started laughing because I was just thinking about how much Georgia would be frothing and passing in and out of consciousness.
We got on the ride and strapped ourselves into the seats, there was a slight wait because I think there was a malfunction somewhere which was slightly terrifying but we went on it and it was so intense! So much more intense than I expected and I just started screaming and all I could hear was James laughing over it.
I loved it though; it was terrifying but so exciting and got my adrenaline pumpin so hard it was ridiculous. We started walking around the park more and it was spectacular, the old school cowboy scenery was “legitimately fake” as Jess and I had made up.  It was the most magical place and I felt like I was in another land.

Dad would have loved the Western Town. We did Pirates of the Caribbean boat ride and it was incredible. They had robotic people that I could have easily mistaken for real actors, they moved so fluently and realistic that it was ridiculous.

This ride was in an underground structure with torches everywhere and pirates songs being chanted and sung.  We even went past a cave with hidden treasure and dead pirates who couldn’t escape. It was amazing.  Then we went on the Indiana Jones roller-coaster which wasn’t as intense as the RocknRolla but it still went upside down and around.  There was also a ride called Space Mountain which was another roller-coaster that was all about space and it took off like a rocket ha a pun! But seriously it did.. It was sooooo much fun as well!!
Not as intense as the RocknRolla but still spun around and went upside down and sideways, but it had more of a lighting and space show to see rather than the RocknRolla.  We also went on the Buzz Light-year ride which was awesome because you hot to shoot Zerg’s minions while controlling the cart and “help” Buzz defeat Zerg.  But the most spectacular moment of the day was when night fell and the Christmas tree and streets lit up.  The parade of Disney characters and Princesses went by and the floats and costumes were just magical, the amount of time, work and dedication that goes into these days blows my mind.  To be a kid at this would be absolutely unbelievable, you would think it was real.  The castle was tinkling in the distance while the little Disney shops were all lip up and Christmas themed with characters and food, costumes and designs.  Oh it was overwhelming!

I watch back the videos on my phone and almost start crying again.  The show at the end was the most amazing experience of my entire existence and if there was ever a moment where I could play a memory on loop forever that day and that show would be it.  I can’t even describe the feeling, like all my dreams, hopes and smiles were being felt all at once.

It was so beautiful it made me cry

I was on a HUGE high and the problems I had in the past few days were tiny specs of dust now. I bought a Disney Paris hoody from the store because I liked ti and because I wanted something to remember Disneyland by.  I also bought a pretty postcard to send to my family back home.  It was late now, maybe 9pm and I was afraid of going back to the hostel by myself so Jess, James and Antito all came back with me, even though it wasn’t their hostel but I was so grateful because otherwise I would have got lost and we had dinner together. Antito wanted to do a boat tour tomorrow night and a pub crawl but at next day I was so god damn tired I just wanted to stay in the hostel which is exactly what I did and just slept in and lazed around,.  My intention was to write in my diary but I was so tired I literately did nothing.  I slept for over 12 hours!

The challenges of moving interstate.

Look at these handsome doggos on the front page of the Country Times.. JayJay, Nim and Reb 'cooling off' and staying home on Red Rock Farm 🐶🌾 Can't wait to be able to travel to see them all again soon ❤️❤️ Ps go pick up a copy and support the local rag! #yorkepeninsula #dogsofinsta #famousdogs #countrytimes
Bali - a place of ex-pats, tourists from around the world and humbling locals willing to help you with anything (especially if you know a lil Bahasa, thanks @global_hobo 😉) ⁠ ⁠ This is from our trip in 2018.. I never got around to writing a blog post but to be honest, I didn't feel it. I didn't want to write about this trip at all. Deeply journaling about it, taking videos and photos of various experiences was enough for me.⁠ I was very, very uninspired in 2018. ⁠ Yes, Bali has rubbish everywhere, those who have been there know it's a third world country but it's still beautiful. Damaged but beautiful.⁠ ⁠ I thought this was a great picture to encompass the impact we have on the environment. A Mother feeding her Baby amongst the rubbish, chaos, just getting on with it. Animals are truly amazing and can survive the harshest conditions. 🐮 #baliindonesia #balilife
My sweet Ham bone these days at home with you have been magical 🌟 Perhaps we should be models. #dogsofinsta #goldcoastlife
I have been spending my time getting ready in the morning, getting dressed and taking Hamish for a walk before beginning my day. No checking my phone, no social media, nothing. Just up, ready and out the door.⁠ ⁠ It can be really easy to fall into slumps with everything going on and our mental health is so, so important. And while the Earth might be healing right now with Swans coming back to Venice and the waters running clear I want to remind everyone that you're allowed to feel angry.⁠ ⁠ You're allowed to feel frustrated and afraid of the future. Whether you be in physical, mental or financial pain, you're allowed to feel it. The uncertainty of the future, the financial anxiety of trying to pay rent or food for the week is real and deserves to be acknowledged.⁠ ⁠ This is also a reminder that we have all been on the 'dole' at some point, whether that be because we're employed casual with minimal hours, full-time mums, live in a rural community with no work, have a disability or have been laid off work because of injury. There is no shame in receiving help, there is no shame in accepting it.⁠ ⁠ Find joy in small things. 🌙🍃
Yesterday I asked if people were afraid to share their art.. 200 people voted and an overwhelming amount said YES!⁠ ⁠ 87% of people said yes.⁠ ⁠ This doesn't surprise me.. I've spent my entire 20s afraid to follow my creativity, afraid to expose myself in that way to the world. Sure, I write on my blog, I share travel adventures in videos. I've acted in theatre, I've directed and written for theatre, I've written an unpublished book... 🤷⁠ ⁠ All of these acts required me to step into the arena and show up for myself. And I have that deadly comparison and jealousy poison running through my veins where I think I could do what she's doing! But. I. Don't. DO. IT!⁠ ⁠ I'm a coward.⁠ ⁠ And I am fucking terrified, I still am. But through my constant journaling I've asked myself over and over why I am afraid and realised a dark truth about myself...⁠ ⁠ I am afraid of what other people think because every action was judged when I was growing up in my country town. I am afraid because I was bullied, I am afraid because I know I will be judged. ⁠ ⁠ BUT no one can hurt me as much as I have hurt myself by not pursuing my own creative energy 🎇⁠ Please remember the same, that nothing can hurt you as much as the pain and internal struggle of not pursuing your creativity. ⁠ So here's to 2020, turning 30 and turning my fears around before my youth runs away over the hill and I'm too old to keep up with those dreams. ⁠ ⁠ Share.. Your... Art... You need it, I need it, we need it.
Happy International Women's Day! 🎉 May we become confident, kind and courageous women who raise brave, intelligent and gentle daughters and sons who have the courage to pursue their dreams and smile big ❤️ Thank you to the special women in my life who have inspired me in so many ways and challenged me to go further. 💫 #internationalwomensday2020