On the Friday I went to the Louvre and wow that museum is incredible.  The rooms are so huge and the great Roman inspired statues are mind blowing.  It was no Versailles but it was still crazy and I saw the famous glass pyramids and Mona Lisa Painting.  I was there all day before coming home before dark, I don’t really want to be out in Paris by myself at night, as amazing as this city is, it’s intense, dirty and riddled with pickpockets and crime. 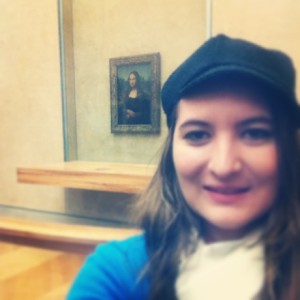 I have been lucky to not experience any yet and I’m not about to take my chances, majority of people speak a little English I haven’t got lost either.  That night while I was having dinner a girl (French Canadian) sat down next to me and she was a sweetheart.  We started drinking and the night prevailed on to drunkess and me working up with a Robert Pattinson look alike named Darcy who I had had a four hour conversation with that morning about games, movies and music,
All my passions, I don’t meet people you click with like that very often so it was nice.

I stumbled to bed from the underground nightclub and did nothing but organise my trip to Rouen the next day to see Caitlan.  I said goodbye to my Turkish friend, who had been staying in my room and bought me drinks the past few nights.  I have met so many people over this past week it’s just incredible, I can barely keep up!

At this point everything was settled with Kris and Charlotte had calmed me down making me realise that Nathan had no right to say the things he said to me and that it was unnecessary aggression and Kris was worked up.  It appeared to be true cause it had all smoothed over now.  Charlotte always knows what to say and makes me a better person, I have massive trust issues with people due to my past but with Charlotte I’ve begun to build bridges instead of walls and let her into the deepest and darkest parts of my soul that no one has witnessed without being afraid of being judged or left anymore, because she’s not going to judge me and she’s not going to leave me and that is something I have never truly had before.

The challenges of moving interstate.

Look at these handsome doggos on the front page of the Country Times.. JayJay, Nim and Reb 'cooling off' and staying home on Red Rock Farm 🐶🌾 Can't wait to be able to travel to see them all again soon ❤️❤️ Ps go pick up a copy and support the local rag! #yorkepeninsula #dogsofinsta #famousdogs #countrytimes
Bali - a place of ex-pats, tourists from around the world and humbling locals willing to help you with anything (especially if you know a lil Bahasa, thanks @global_hobo 😉) ⁠ ⁠ This is from our trip in 2018.. I never got around to writing a blog post but to be honest, I didn't feel it. I didn't want to write about this trip at all. Deeply journaling about it, taking videos and photos of various experiences was enough for me.⁠ I was very, very uninspired in 2018. ⁠ Yes, Bali has rubbish everywhere, those who have been there know it's a third world country but it's still beautiful. Damaged but beautiful.⁠ ⁠ I thought this was a great picture to encompass the impact we have on the environment. A Mother feeding her Baby amongst the rubbish, chaos, just getting on with it. Animals are truly amazing and can survive the harshest conditions. 🐮 #baliindonesia #balilife
My sweet Ham bone these days at home with you have been magical 🌟 Perhaps we should be models. #dogsofinsta #goldcoastlife
I have been spending my time getting ready in the morning, getting dressed and taking Hamish for a walk before beginning my day. No checking my phone, no social media, nothing. Just up, ready and out the door.⁠ ⁠ It can be really easy to fall into slumps with everything going on and our mental health is so, so important. And while the Earth might be healing right now with Swans coming back to Venice and the waters running clear I want to remind everyone that you're allowed to feel angry.⁠ ⁠ You're allowed to feel frustrated and afraid of the future. Whether you be in physical, mental or financial pain, you're allowed to feel it. The uncertainty of the future, the financial anxiety of trying to pay rent or food for the week is real and deserves to be acknowledged.⁠ ⁠ This is also a reminder that we have all been on the 'dole' at some point, whether that be because we're employed casual with minimal hours, full-time mums, live in a rural community with no work, have a disability or have been laid off work because of injury. There is no shame in receiving help, there is no shame in accepting it.⁠ ⁠ Find joy in small things. 🌙🍃
Yesterday I asked if people were afraid to share their art.. 200 people voted and an overwhelming amount said YES!⁠ ⁠ 87% of people said yes.⁠ ⁠ This doesn't surprise me.. I've spent my entire 20s afraid to follow my creativity, afraid to expose myself in that way to the world. Sure, I write on my blog, I share travel adventures in videos. I've acted in theatre, I've directed and written for theatre, I've written an unpublished book... 🤷⁠ ⁠ All of these acts required me to step into the arena and show up for myself. And I have that deadly comparison and jealousy poison running through my veins where I think I could do what she's doing! But. I. Don't. DO. IT!⁠ ⁠ I'm a coward.⁠ ⁠ And I am fucking terrified, I still am. But through my constant journaling I've asked myself over and over why I am afraid and realised a dark truth about myself...⁠ ⁠ I am afraid of what other people think because every action was judged when I was growing up in my country town. I am afraid because I was bullied, I am afraid because I know I will be judged. ⁠ ⁠ BUT no one can hurt me as much as I have hurt myself by not pursuing my own creative energy 🎇⁠ Please remember the same, that nothing can hurt you as much as the pain and internal struggle of not pursuing your creativity. ⁠ So here's to 2020, turning 30 and turning my fears around before my youth runs away over the hill and I'm too old to keep up with those dreams. ⁠ ⁠ Share.. Your... Art... You need it, I need it, we need it.
Happy International Women's Day! 🎉 May we become confident, kind and courageous women who raise brave, intelligent and gentle daughters and sons who have the courage to pursue their dreams and smile big ❤️ Thank you to the special women in my life who have inspired me in so many ways and challenged me to go further. 💫 #internationalwomensday2020