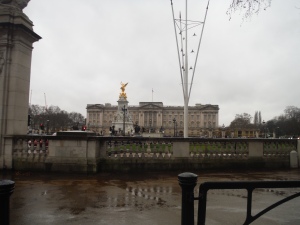 I’m finally on the road with Caitlan. We are staying at a hostel right near London Bridge in such a nice area.  London is so clean compared to Paris, it’s so much better!
The weather has been cold and rainy here though, I love this weather but Caitlan is getting sick which sucks.  We saw Buckingham Palace and where the royalty used to live/still live. But the Queen wasn’t home because the flag wasn’t raised.
Buckingham Palace is beautiful and I cannot believe the Queen actually lives there, in a casual castle.
England is amazing, stunning gardens of green.  We also saw Big Ben and went to a local pub.  The English accent is so sexy but the people not so much. I haven’t had the best English gentlemen experience. They swear a lot and are a bit sleazy.  This guy we met on the free tour as half Canadian, half Israelian and was so attractive.  He was a writer as well so I instantly found him interesting.  He was from Israel so had a thick accent and spoke Hebrew to his friends but he spoke very good English. That night he got really drunk with Caitlan, Ericka, Nathan and I (our other Australian roommates).
Nathan has lived all over the world including Canada and LA working as an accountant and now he is looking for work in London. Ericka is just travelling around. But anyway Zyk (Israelian/Canadian) hooked up with another woman and then when she left tried hitting on me..

I could have punched him in the face, here I was thinking he was a nice guy. I rejected him, went to bed and then Caitlan, Nathan, Ericka and I stayed up till almost 4am talking and laughing. Especially talking about crapDavid who was randomly staying in London now after Paris.  He tried hitting on Erick if she was easy. He’s so crap, so crap.  Apparently he’s thinking about going to Scotland for New Years so if I see him I’ll probably punch him our and scream at the same time.

We did a night tour of London and learnt all about the tower of London, which is the most haunted place in the world and people were executed there.  They used to do such brutal torture techniques to the prisoners and some exacutions didn’t work and the executor couldn’t chop the victims head off after 11 tries.  But the most interesting and horrifying of the tour was finding out the details of the infamous Jack the Ripper murders.  Georgia would have loved it and wanted to go in the haunted tower immediately.  This amused me the whole time I was on the tour.

The murder of Mary was the most brutal, hacking at her and disembodying her organs.  I can’t fathom how someone could do that and everything was found at the crime scene except Mary’s heart…. He took it.  When they found the victim, they didn’t think it was human being. Absolutely chilling.

There are so many theories behind Jack the Ripper, it’s interesting but terrifying.  One theory is that he had spholis because it sends you insane, as if somerthing so horrific cannot be committed without justifying that he must have been insane because no normal human being could do that.  But I believe that he knew exactly what he was doing.

We also went to the Natural History Museum which was free and incredible, David Attenborough is a huge inspiration to me and it was amazing to see a tribute there for him and watch it.But the best thing we have done in London so far is the Wax Museum with all the movie and music stars and political and religious inspirations and then the Marvel comic heroes!

So many photos were taken and I was fan girling so much.  They looked so real, it was crazy and actually seeing how tall/short they were was awesome.  We definately got our monies worth there.  I think tonight for Christmas Eve Caitlan, Ericka and I are going to Winter Wonderland and then tomorrow for Christmas we are wearing Christmas sweaters and having a feast here at the hostel.  I’m having so much fun and we still have two tours to do and Abby Road to see for The Beatles.  I really wish we could have done Harry Potter world though but it’s sold out for thue year.  We just went shopping down Oxford Street today and I got a beanie, scarf, an awesome winter dress and an amazing jacket and then some cute flats. I’m having so much fun in London! I am definitely coming back to England UK in the future, it’s amazing!