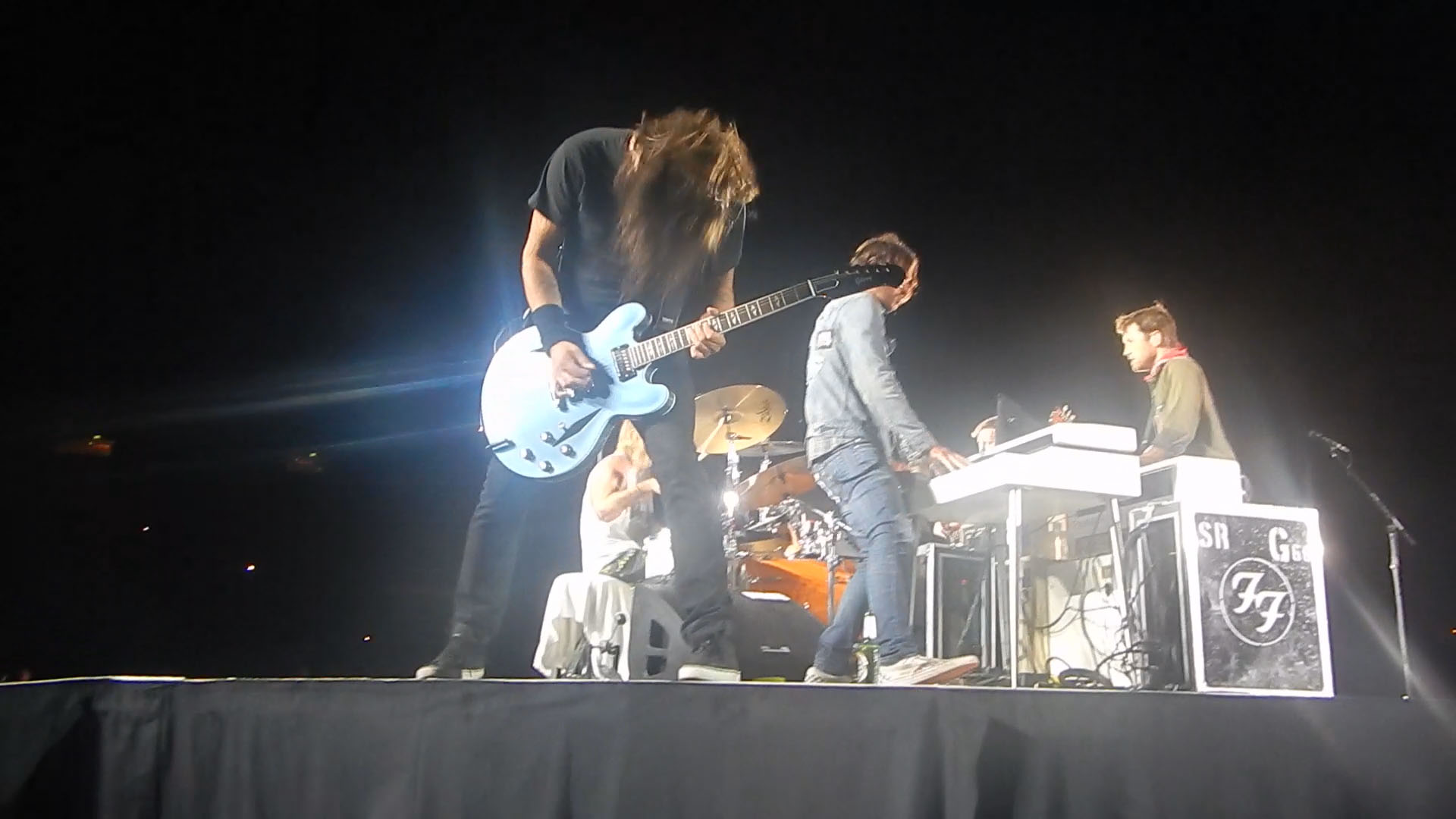 The Foo Fighters played the Coopers Stadium to 21,000 strong backing up bands were punk rockers Rise Against and local Perth band Delta Riggs.
Delta Riggs are the child prodigy of Jet with their fast guitar rifts and skinny jeans from the early 2000s, their hair swept over their face covering the faces of future rock stars.
They owned the stage and have incredible presence, igniting with energy and can only further their career from here.
Rise Against haven’t moved from their political stance of fast paced angry music that changes BPM frequently in almost every verse to chorus and soars through the stadium like a bat out of hell.
The flames that ignited their ‘Rise Against’ block letters on stage were an accurate description of the fire inside their rioting fans in the nose bleed section. Playing their hits such as “Prayer of the Refugee, Give It All and Savior” Rise Against amped up the crowd in preparation for Foo Fighters.
To further this anticipation, they invited the drummer of “Skream” (Dave Grohl) to drum a cover of the band and the crowd roared and cheered at the front man’s appearance on stage. A million phones went up in the air to record the moment of Dave Grohl drumming. Do you not know he used to drum for Skream and then Nirvana? 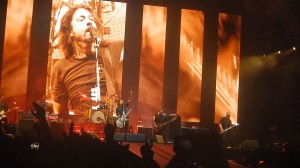 The Foo Fighters pounded onto the stage with 21,000 plus people screaming for them. Opening with their new single from Sonic Highways “Something from Nothing.”
They were ready to rock and you had better be ready to roll with them because the energy admitted into the atmosphere is infectious.
Dave Grohl teased with running up and down the stage, the 46 year old bounding with the energy of his inner 17 year old self.  Every single person in that stadium felt involved. With the use of a huge runway, with an acoustic bridge staged at the end and a cubic middle section for the band to rise up from and play for the audience, every single person got their monies worth.
Dave Grohl wasted no time pointing out to the people in the stands, raising the house lights to see every person and playing the “which side of the stadium can shout louder” game.
Celebrating their 20 year anniversary with this tour I had to constantly pinch myself that these people had done this for 2 decades of music and traveled the entire world playing shows.
As a fellow musician it made me realise that I have such a long journey ahead of me and that I need to not be afraid to improve every single day and to keep playing for the next 20 years. It’s not talent that makes someone good, quite often it’s just consistent practice.
It didn’t matter that the guitars screeched, the drums were loud or that Dave Grohl’s voice cracked in songs as he headbanged furiously to the rhythm of his guitar because it was rock n roll, it was true and it was THEIR sound.
In the words of the great man himself, “Who is to say what’s a good voice and what’s not a good voice. The Voice? Imagine Bob Dylan standing there singing “Blowing in the Wind” in front of Christina Aguilera. “Mmmm…. I think you sound a little nasally and sharp. Next!
It’s YOUR VOICE. Cherish it. Respect it. Nurture it. Challenge it. Stretch it and scream until it’s fucking gone. Because everyone is blessed with at least that, and who knows how long it will last..”

Guilt. Guilt is cancer. It will confine you, torture you, destroy you as a musician. It is a wall. It is a black hole. It is a thief. It will keep you from YOU. Remember learning your first song, or riff, or writing your first lyric? There was no guilt then.
Remember when there WAS no right or wrong?
Remember the simple reward of just….playing music? You are still, and will always be that person at your core.
The musician. And, The musician comes first. 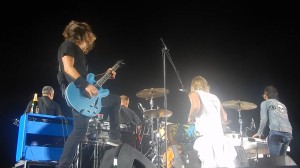 Halfway through the show they popped out in the centre piece of the run way where after much debate over the past week I had carefully chosen to stand. I am so glad that in the end I had chosen to stand here because every single member of the band took the time to smile down at us and Chris threw me his guitar pic and it landed straight into my hands and with a wink and a smile he walked like a rock star back to the main stage.
I felt incredibly inspired to pick up my guitar and learn more and when I went home that’s exactly what I did, I even played My Hero and Everlong with the his guitar pic.
You’re heroes should inspire you, not intimidate you.

I felt uneasy at the first of many fans wearing Nirvana shirts around the stadium. Was it a kind of ‘fuck you’ statement or did they simply like Nirvana better than Foo Fighters?
Either way it was a nod to the earlier days of their career and the era of punk rock 20 years ago.
Many other fans wore band shirts, such as Led Zeppelin, ACDC, The Rolling Stones. But the Nirvana shirts stood out like a beacon on a black sea. This isn’t Nirvana 2.0, it’s a completely different band, did you not get the memo?
Anyway it doesn’t matter what the fans wear or what they look like (I’m looking at you Collaspe Board) because it isn’t Nirvana 2.0, Kurt isn’t rolling over in his grave because Kurt is a skeleton in the ground and it’s about the music, it’s rock n roll.
And 21,000 plus people in little old Adelaide certainly means that the Foo Fighters are NEVER forgettable and NEVER horrible. 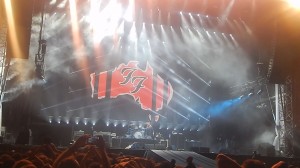