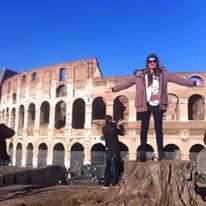 What we do in life echoes in eternity.

I rushed back to my little cabin to find the window smashed and curtains dancing in the midnight air and florescent light. I immediately sprung into action, frantically opening the lock and ripping the door open to find my possessions scattered across the room. A quick search confirmed my fears, my camera, phone, souvenirs, money and social status possessions gone.
An Albanian man had been visiting the cabin all week, between language barriers I decoded that he was asking for a smoke. I told him “I don’t smoke” and after a few minutes of repeating the word “no” until it sounded foreign on my lips he disappeared into the night.

The following evening he returned asking if I wanted a drink, again I said “no” with alarm bells ringing in my head of rufie stories and non-consensual sex. He told me if I wanted to join his drinking session he was staying at Cabin 137 just down the road, constantly repeating he would “take good care of me.” Safe to say my fight or flight  intuition was tingling and I left for the restaurant on the property fast.  However; upon my speedy, out of breathe arrival I realised that in my escape I had forgotten all cash to pay for a beer and pizza (when in Rome right?).
Feeling embarrassed I rushed back to my little cabin to find the place in chaos. He’s staying in 137 isn’t he? Okay let’s go.

With burning anger and a vigilantly justice vibrating through my body I marched to 137 and furiously slammed my fist on the door.
He opened and his shocked expression was enough to tell me he had not expected to be confronted. Taking this advantage I pushed him back making him fall over and stumble to the floor, I lined my steel cap hiking boot up and demanded my items back. It is indoctronated into us at a young age that we should be wary of strangers, and that your own life and safety is more important. But looking at this small scared man in below me who had stolen my items (most importantly my travel camera) I held no fear for my own safety.

He threw my phone to the other side of the room, distracting my threatening stance and used the opportunity to run through the cabin door into the night.  I chased him but he was fast and in a ninja bound used his feet to climb over the wall which was isolating our cabin site from the world. I couldn’t follow so settled to scream and cuss instead. Eventually logic stepped in and told my emotions to return  to his cabin and see what he had left behind. The irony was that he had also stolen my glasses making my poor eyesight a challenge in the dark.

He had been a good thief, leaving nothing of mine behind in his escape. I searched under his bed, through the cupboards and found he had left behind his passport, train ticket across the country and working Visa all in the top draw.
His name was Mario. My heightened emotions laughed, “what a shit name.”  In truth it could have been any name and my emotions would have crowned it as shit.  With all his identity papers proudly in hand I moved onto the next step and ventured down to the restaurant to call the police. They arrived in five minutes and tried communicating in Italian and broken English. A part of me wondered if I had made the right decision chasing after the thief on my own, maybe it would have been more efficient to inform the police first.  But it took almost half an hour for them to finally move down to the cabins and search for him, they found nothing and I knew I had made the right decision. I handed them his papers and they told me to file a report in the morning. That was it, my stuff was gone.
All the photos I had taken, my glasses, money; gone.  At the time I thought of myself as brave to march down to his cabin and demand my items back, little did I know I could have risked my own life.

One night over a bottle of Shiraz and a home made meal. My friend and I were exchanging travel stories. I confessed my Rome robbery experience to her and in turn she told a tale of a robbery in Mexico. Her friend had been travelling throughout Mexico for some time and one night decided to walk home with her bag of electronic possessions by her side.A stranger stopped her and demanded she hand over her bag, she refused and they shot her in the back and stole it anyway.

My heart dropped as I relived my own robbery experience, what if this Mario character had had a gun?  How stupid of me to risk my own well being over items I could claim on insurance. The injustice of the situation was not as valuable as my own life.  Her friend survived the bullet in the back but she took over a year to recover physically and another year to recover mentally, she walks with a limp and her back hurts. She was twenty at the time.   I’m a minimalist by default. I don’t enjoy having a lot of possessions and there is a real sense of freedom in travelling alone with a suitcase of clothes questioning “why do I have so much stuff?”  ”This serves me no purpose holding onto these items.”

However, it was my last day in Rome when I had my camera, phone, souvenirs, money and social status possessions stolen.

I thought to myself, “you can’t steal my camera. How am I supposed to upload them to Facebook and let the likes and comments feed my ego and make me feel proud of my travels.”
I had been staying in cheap cabins outside of Rome, thirty minutes away from the inner city and (most importantly) the Colosseum.   I was lucky with my Roman robbery but some people aren’t. The most important lesson I have learnt is to realise that materialistic items don’t matter, not when compared with your life.  These items can always be claimed on insurance (always have travel insurance) and replaced, but a human life doesn’t have another back up. Please do yourself a favour and train your brain into letting go of materialistic items, stuff can be stolen and it hurts, it’s annoying, inconvenient, sad but do you know what’s worse then having your items stolen?

Having your life stolen.

And life is far more valuable then a battery operated electronic device.